The following is a guest blog post by the German Toilet Organization of which this blog is a supporting member:

Berlin, 29 Nov 2017 – 11th grade students of Berlin’s Kaethe-Kollwitz-School surprised tourists at the city’s Brandenburg Gate with a flashmob and an ensuing “reverse-demonstration” on the occasion of the World Day of People with Disabilities. One student began proclaiming “Toilets save lives” in sign language – over and over again. With each repetition he was joined by more peers. And even passers-by joined in. Afterwards the group orbited Pariser Platz with a reverse demo, walking backwards to draw attention to the fact that not enough progress is being made concerning the issue of inclusive sanitation. 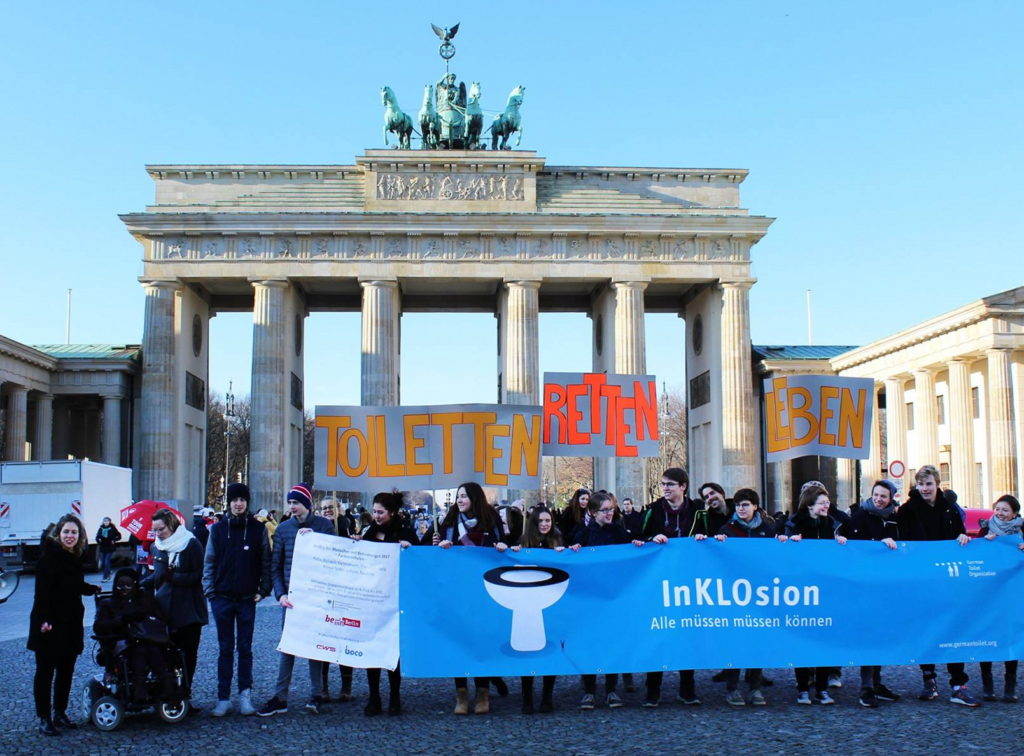 InKLOsion (IncLOOsion): Berlin students in front of the Brandenburger Tor demanded the inclusion of 4.5 billion people who have no access to safely managed sanitation. (src)

The event was organised by the students in collaboration with the German Toilet Organization (GTO). Together they demanded the inclusion of 4.5 billion people who, according to the World Health Organization, have no access to safely managed sanitation. People with disabilities are particularly affected. The event organisers highlighted that around 80% of the 1 billion persons living with disabilities reside in low- and middle-income countries, with mostly very difficult access to safe drinking water and sanitation.

The situation is the result of a vicious cycle: Poverty, poor hygiene and disease can be the cause of disabilities, which in turn lowers the chances of participating in everyday life, obtaining an education or earning a living. Accessibility of sanitation facilities is a good indicator of an inclusive society. Narrow stalls, missing ramps and handholds are just a few examples of avoidable barriers, which exclude many people.

“From our project level experience in Nigeria, we know of the huge impact that accessible toilets and sanitation have on the lives of learners with disabilities. Access to school toilets is particularly key to bringing and keeping girls with disabilities in school”, says Toyin Aderemi-Ige, Head of Christoffel Blindenmission (CBM) in Nigeria. She thanked the students for their support.

“Inclusion is a global issue. We all must contribute, particularly since the global community signed up to the Sustainable Development Goals – with a strong focus on “leaving no one behind”, says Thilo Panzerbieter, founder of the GTO. “Goal 6, ensuring the availability of clean water and sanitation for everyone, can only be achieved via incLOOsion.“ The campaign is part of the educational project “Klobalisierte Welt” run by the GTO. During the project, the pupils checked their own school toilets and washrooms for accessibility and entered the results in the worldwide accessibility database, Wheelmap.org. The inventor of the wheelmap is Raúl Krauthausen. In 2008 he founded the organisation Sozialhelden e.V. in Berlin, which operates Wheelmap.org. “For anyone around the world using a wheelchair, it’s very important to know where the nearest wheelchair-accessible toilet is. Therefore, we are very pleased that the students under the guidance of the GTO have taken a closer look at their sanitation facilities and have registered the wheelchair access information on Wheelmap.org,” says activist Krauthausen, who is also an ambassador for CBM.

The “Klobalisierte Welt” project receives financial support from the Federal Ministry for Economic Cooperation and Development (BMZ), from Bread for the World – Protestant Development Service and the city-state of Berlin. GTO thanks the sign language school Yomma, for their support and recognises CWS-boco, as a long-time supporter of GTO projects.

This website uses cookies to improve your experience while you navigate through the website. Out of these, the cookies that are categorized as necessary are stored on your browser as they are essential for the working of basic functionalities of the website. We also use third-party cookies that help us analyze and understand how you use this website. These cookies will be stored in your browser only with your consent. You also have the option to opt-out of these cookies. But opting out of some of these cookies may affect your browsing experience.
Necessary Always Enabled

Any cookies that may not be particularly necessary for the website to function and is used specifically to collect user personal data via analytics, ads, other embedded contents are termed as non-necessary cookies. It is mandatory to procure user consent prior to running these cookies on your website.