Kenya-based video journalist Ruud Elmendorp recently produced this short trailer (on behalf of Waste.NL) on a young woman that refuses to marry her boyfriend – until his family builds a proper toilet:

The story is about a boy who is in love with the daughter of a school teacher. Much to the dismay of his father, she refuses because she finds their toilet unusable and refused to have to go to the bush for defecation.

The women’s group has filed a number of complaints due to poor sanitation and present this to the village chief, incidentally the uncle of the boy. He is quite amazed by this and decides to call the government sanitation adviser.

After an animated session with the villagers and the chief, many decide to go for suitable toilets. The film ends happily with the girl accepting the marriage proposal as the sanitation issues have been solved.

Another blog post on the Peepoo bag system – the biodegradable toilet bag system for use in places where there are no toilets available. A single-use, self-sanitizing, biodegradble system that turns into fertilizer after use. 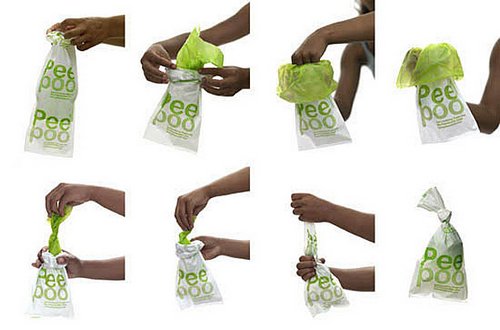 A follow-up to another blog post from December 2008 from my private blog on the same subject (“Flying Toilets 2.0”), if you will, because a lot has happened since then and I wanted to find an open space to note down all the pros & cons, the advantages and disadvantages of such a bag system. You are of course invited to share your opinion on these bags and leave a comment! END_OF_DOCUMENT_TOKEN_TO_BE_REPLACED