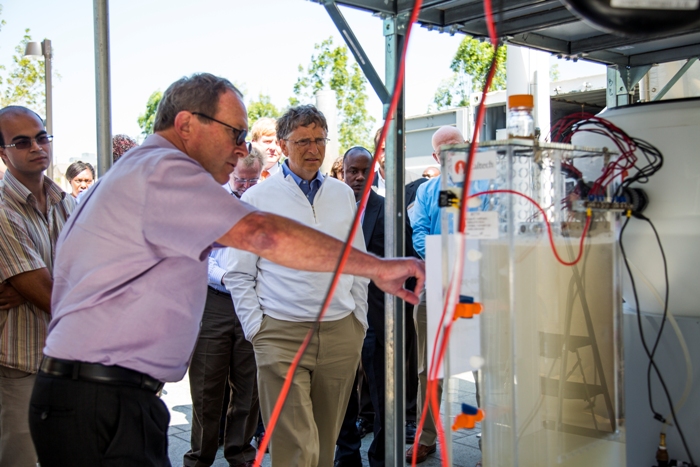 1st prize:
A team from the California Institute of Technology won the top prize of $100,000 for a self-contained, solar-powered toilet and wastewater treatment system. 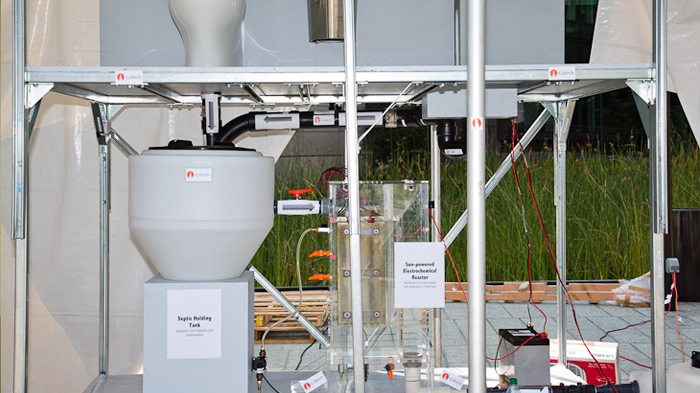 In this system, a solar panel produces power for an electrochemical reactor that is designed to break down water and human waste into hydrogen gas. The gas can then be stored for use in hydrogen fuel cells to provide a backup energy source for nighttime operation or use under low-sunlight conditions. (src & image credits)

Update: a video is available that describes how this “Self-Contained, PV-Powered Domestic Toilet and Wastewater Treatment System” works:

“They would repurpose the solar panels and batteries to powering TVs and charging cell phones and go back to shovels for their sanitary needs”, says one commentator on YouTube.

2nd prize:
A group from Loughborough University in the U.K. took second place for a toilet that transforms faeces into a biological charcoal (biochar) through hydrothermal carbonization (decomposition at high temperatures without oxygen and in water) of faecal sludge. 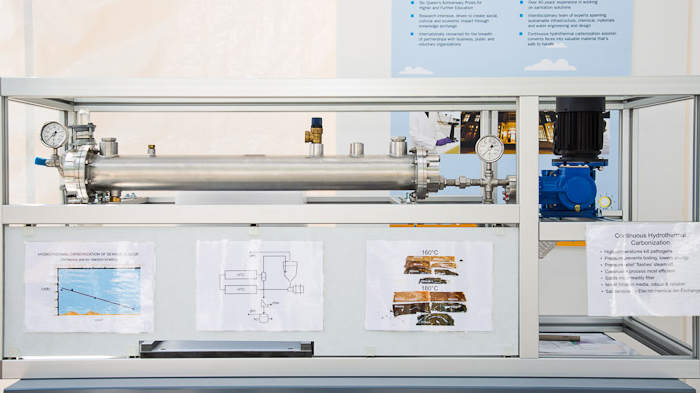 The proposed system will be powered from heat generated by combusting the produced biochar and will be designed to recover water and salts from faeces and urine. (src & image credits)

3rd prize:
A group of chemical engineers from University of Toronto, Canada developed a system which sanitizes waste within 24 hours: 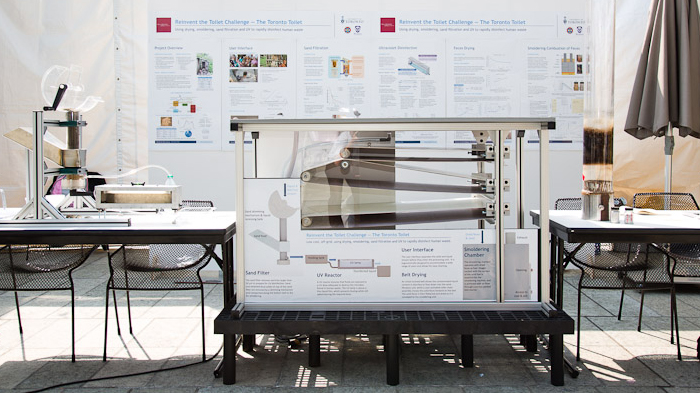 It’s a technology for treating solid waste streams through mechanical dehydration and smoldering (low-temperature, flameless combustion) that will sanitize faeces within 24 hours. Urine will be passed through a sand filter and disinfected with ultra-violet light. (src & image credits)

The press release also included the winners of round 2 – a much debated challenge as it included a requirement for “prototyping and testing entirely stand-alone, self-contained, practical sanitation modules which intake bodily wastes and swiftly dispose of them without any incoming water piping, outgoing sewer piping or electric or gas utility services”.

Reinvent the Toilet Challenge Round 2 Winners

Cranfield University
This nearly $810,000 grant will help develop a prototype toilet that removes water from human waste and vaporizes it using a hand-operated vacuum pump and a unique membrane system. The remaining solids are turned into fuel that can also be used as fertilizer. The water vapor is condensed and can be used for washing, or irrigation.
Contact: Fiona Siebrits/ +44 (0) 1234 758040 / f.c.siebrits at cranfield.ac.uk

Eram Scientific Solutions Private Limited
A grant of more than $450,000 will make public toilets more accessible to the urban poor via the eco-friendly and hygienic “eToilet.”
Contact: Manohar Varghese / +91 9747060700 / manohar at eramscientific.com

RTI International
This $1.3 million grant will fund the development of a self-contained toilet system that disinfects liquid waste and turns solid waste into fuel or electricity through a revolutionary new biomass energy conversion unit.
Contact: Lisa Bistreich-Wolfe / +1 919.316.3596 / lbistreich at rti.org

University of Colorado Boulder
A nearly $780,000 grant will help develop a solar toilet that uses concentrated sunlight, directed and focused with a solar dish and concentrator, to disinfect liquid-solid waste and produce biological charcoal (biochar) that can be used as a replacement for wood charcoal or chemical fertilizers.
Contact: Karl Linden / +1 303 302 0188/ Carol Rowe / +1 303 492 7426 / Carol.Rowe at colorado.edu

Also, an interesting comment on Bill Gates’ blog post “Inventing a Toilet for the 21st Century” caught my attention as it has some interesting arguments:
“…(…) the challenge is more about planning, management, planning, financing, energy use/sourcing (…), costs, implementation, and, in more developed regions, dealing with tech verifications costs and regulatory issues. Technology is not the first deficiency in promoting effective sanitation. (…) many toilet innovations do not make it to market because the tech verification costs (NSF, etc.) costs $40,000+ and testing programs either do not address new configurations (such as 2-drain toilets) and are too expensive. Add to that arbitrary conventions, such as the illogical traditional siting of the toilet drain pipe in the U.S., which forces the use of higher flush volumes, and you get a stalled innovation market. (…).”

So, obviously, there’s much more to the picture than a reinvented toilet system alone. “A big part of the challenge is technological.”, writes Bill Gates on his blog. And the publicity the BMGF has brought to the sanitation sector in the past few years is truly immense. “We also have to work closely with governments, businesses, and communities to stimulate demand for better sanitation, encourage investment, and create supportive public policies that will allow these innovative solutions to succeed.”, he argues. Well, exactly.

And the best part? All of the future technologies aren’t limited to some “developing” countries only. It’s a global issue, and I am glad that someone as prominent as Bill Gates or Prince Willem-Alexander are promoting our core issue here. Great stuff!

Update: here’s a full list of all exhibitors during the Reinvent the Toilet Fair (thx, Carol!).

Currently, the pursuit towards sanitation is one of the pressing issues around the world.

So much for that, I just want to share one video I found on the internet about Ecosan Waterless Toilets: