According to UNESCO (World Water Report, 2019), 2.1 billion people worldwide have no access to safe drinking water. Berlin school children demonstrated against the global water crisis on the occasion of World Water Day 2019.

Lugging water-filled jerry-cans and presenting self-made hand washing facilities, the pupils demanded “Water for everyone”. Their message was loud and clear: Everyone has a right to access clean and safe drinking water. Poor and marginalised population groups in particular should not be left out. They are the ones suffering most from the global water crisis: people with disabilities, the elderly, indigenous people, but also girls and women, who in many societies are responsible for providing their families with water and travel great distances every day to do so. END_OF_DOCUMENT_TOKEN_TO_BE_REPLACED

During a recent trip to the GTZ office of the “sustainable sanitation – ecosan” program in Eschborn, Germany, I stumbled upon the following interesting map that display various international NGOs working on water supply & sanitation issues in Africa. 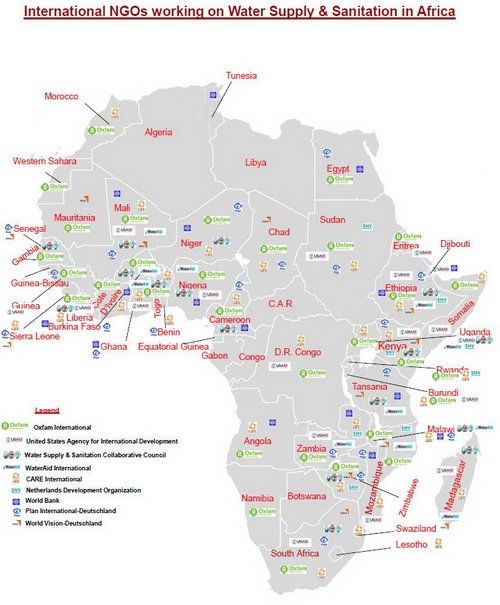 Steffen Blume of GTZ-ecosan, who created this map for his colleagues at work & agreed to share this with us, kindly asks for some feedback in return. So if you’re active or know of an active NGO within the water / sanitation sector that isn’t listed here, please directly send your feedback to Steffen Blume or kindly use the comment form below. Thank you!

Going by Social Media standards, World Water Day 2010 has been a full success. “World Water Day” is a trending topic on Twitter, thousands of people gathered online and offline to join the world’s largest toilet queue and various other NGOs as well as GOs are using Facebook & their blogs to highlight the importance of such an international day.

Well, here it is:

Did you know that globally some 2.6 billion people are without access to any kind of improved sanitation?

Did you know that more than 2.2 million people, mostly in developing countries, die each year from diseases associated with poor water and sanitation conditions?

Did you know that the most affected group is the one of children under the age of 5?

Did you know that sanitation rarely receives the required attention and priority by politicians and civil society alike despite its key importance on many other sectors and for achieving most of the Millennium Development Goals (MDGs)?

People often do not want to talk about sanitation, and when asked about their wishes, you’ll often hear answers like “a new tv set, a vcr, a car..” etc. instead. So how come sanitation – as a basic human need – has become such a neglected request?

And please beware: just because the above mentioned facts mainly cover developing countries, it doesn’t imply that industrialized nations are having much better sanitation systems! Just think of the public toilet system in your town and ask yourself: would you want to use these toilets (if any) for your next nature’s call?

With this small blog on the internet, we’ll try to display various approaches to an improved sanitation, cover some good and bad technologies and hopefully help to put sanitation on your agenda.

Because change will only happen if people really want it.